She ran away with me

First and foremost, it is not a love story scripted in heaven where the hero always wins. The ending of the movie is still to be decided. So if spoken truth on locations; chances of bad endings are more haha as it is still ongoing real-life drama but I will try to keep it 98% correct.

Distracted her with tons of fish

If you are new to my blog, Kavi and I are in love for nearly 4 years now. She’s Rajastani and her father is firm angry Indian dad and he will not allow her to marry me at any cost. He had clearly mentioned in my college that I have no chance !

My mom and dad went to Jaipur to discuss about the marriage and he had threatened that he can commit suicide and other stuffs. But everyone loves themselves and I think her father loves himself more. So he didn’t opt for suicide and initiated a manhunt after me and her; We married two days ago as I am writing this but her father told my father over the phone that he will make her marry again (He doesn’t care if I am legally married to her; as I heard from Kavi, no one from her relatives have marriage certificate) to some other guy who’s monthly salary will be her hourly income! Yes, She earns in seven digits a month along with me! What the fuck?

NB: If you choose to run away, the police will most likely find you unless you have parents/guardians of some sort that don’t care and wouldn’t report you missing. I’m assuming you love your girlfriend, so, think of it this way. What if you guys do get found? Maybe you wouldn’t be allowed to see each other anymore, or maybe she would have to move or something would happen where you can no longer be together. It would suck. If you run away it will probably end up not working out for the best, things aren’t exactly in your favor. The question you have to ask yourself now is, are you really willing to risk your relationship?

It was a Sunday morning and Kavita called me, ‘Amit, you need to book tickets to Delhi cause my father is about to take me to my village and make me marry some other asshole.’ I didn’t asked her further. I clear-tripped her a ticket but it was unavailable. It was hence a nightmare.

I decided something out of the box. I called the Spice-jet customer care and told them the truth that my girlfriend loves me and need to run right away or her father will force her and bring apocalypse. Luckily, they got me a ticket for Jaipur to Delhi; overpriced over 4x (nearly 10k) but I was happy to give even 50k for that ticket. I needed that and hence I grabbed it.

I packed my bag and left my Delhi Office immediately and hailed an Uber. Delhi traffic ensured that she reached Delhi from all way Jaipur (Though we started our journey at same time!) 10 minutes before I reached the airport!

Just packing a suitcase and leaving with no set final destination may be adventurous and romantic, but it certainly is not responsible. So, I called my dad!

PS: I forgot to take my clothes from the Dhobi in a hurry. Meh :/

So, in Delhi Airport, I was sitting and Kavi was in mixed tuned having random cute swings in her mood as usual –

Fear – That her CIA dad (her dad is like some kind of demon god to her; remember Dahaka from Price of Persia, Warrior Within) might catch her.

Guilt – Her family might get outcast and her brothers have to end up forever single. Arrange Marriage and Government Job are the national anthem there.

Sadness – That her marriage will not be happening as the family festival type.

Happiness – That she’s with me.

Anger – That her father screwed her sleep that morning.

Fear – Well ? I can go-on forever…. It repeats! Kavita exudes the casual demeanor of the girl next door. I liked how she ‘auto tune’ herself by answering her own questions and also making two new ones.

PS: Have you seen Inside out? Anger’s in charge in Kavi’s head. But the curious thing is I never saw her get angry with anyone else except me. Phew! 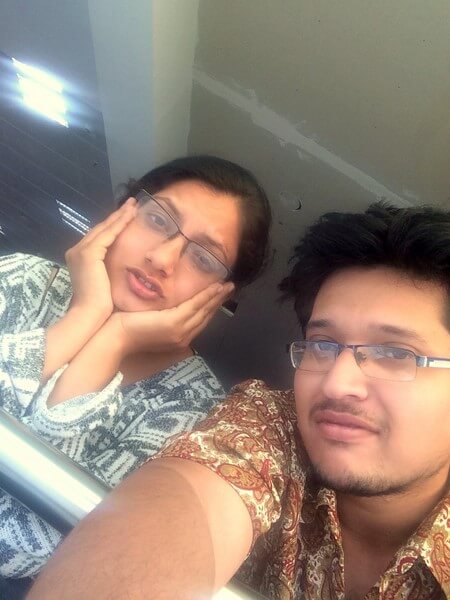 Snapped between her sessions with endless doubts :)

And I settled on Starbucks. Do you often go to Cafe Coffee Day ? Then, you must be knowing Devil’s own. Yup, that’s my favourite too! But she cleaned up the white cream over it all the time haha! In starbucks, there is a separate option for big cup of cream. So I bribed her, hence!

I heard a familiar sound. Haha, it was one of my facebook friend Binit; we knew each other from my college as we once went over a cup of coffee with discussions of a web concept. He asked me where I am going. I answered flat that I am running away, lol.

To the shock, he ran away too and the hilarious fact is her wife is from Rajasthan too! So, Kavi interrogate questions like when her wife’s father accepted him and other stuff to interpolate them to her scenario. Well, we chatted for long 2 hours or more maybe and he left for Bhubaneswar.

People of Rajasthan are conservative whereas my family is completely opposite. They have always believed in women empowerment. We gave freedom to choose what one wants to. We value opinions. There is no restrictions in the cloth one wear, food one eat or hours one stay out.

So, I called my dad and he was strangely peaceful. He told me not to tell my mom so that she doesn’t step into panic mode. My mother runs on a self service mode of having mini heart-attacks in this kind of scenarios. Though, she had a love marriage with my father too!

So, her face was like grumpy cat when she first saw us!

Hence he lodged a case against me in name of kidnapping and then started another chapter.

To be continued…
JaipurKavitaloverunning away with girlfriend

Picking the best products to sell is the next big challenge after deciding to start your eCommerce...

Protected: I will slap you next time

Yes, I need to work   Cause there are three things First you do not know even value of 10 INR...

My experience with Kohona

Url http://artretreat.org/amit/quiz/v1/ Ok, as you are seeing it; it is a work in progress website....